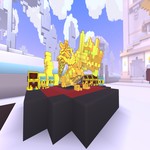 Luxion of the Golden Hoard is a gorgeous dragon who returns to the Hub twice a month to trade goods for Dragon Coins. You’ll find Luxion near the Dragon Crucible from January 10 until January 14. He’ll vanish at 4 AM PST (11 PM UTC) on January 14, so don’t wait too long!

Just a few of the items Luxion is offering up on this next visit:

What are you waiting for? Grab your coin case and hurry, dear Trovians!

Luxion’s loot is a way for players who missed limited-time items in the past to pick them up directly. You will also find brand new items at a higher Dragon Coin price periodically. Items will repeat eventually, but it may take a while for a specific piece of loot to return so be sure to check back on every visit! 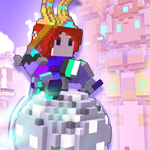 Happy New Year, Trovians: Time to get this party started and kick off 2020 in style!

With Renewus comes the renewal that comes with the passage of time, heralding the new mysteries and challenges that lie ahead.

This two-week event runs from December 31st to January 14th (3 AM PST/11 AM UTC), and with it comes new requests from Qubesly. Tackle his tasks and festive feats to get your very own Personal Renewus Orb mount. Get ready to drop the ball and ride on in glitz and glamour!

There’s an exciting year approaching, and we couldn’t ask for a better community. We can’t wait to show you what’s ahead! 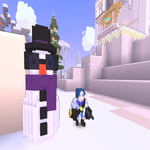 As the first snowflakes slowly fall upon the land, Trovians hearts are once more invaded with warmth and their spirits seized by the melodic nostalgia of the season. The ornaments were carefully arranged, the lights blink enlight the short dark days as carols echo in the distance. The Snowfest is all around us and we wish you Trovians a great event.

From December 17th (3 AM PST/11AM UTC) to December 31st (3 AM PST/11 AM UTC), we welcome all Trovians in joining the Snowfest celebrations and to fight a new menace over Trove’s world: Qubesly needs your help fighting the “Troval Warming”!

Snowfest returns for the holiday season with several adventures around fighting the Troval Warming. This adventure chain will earn you Snowy Seals, the event main currency, so you can craft your favorite Snowfest items. Additionally, three new NPC’s joined Trove’s Hub for this year’s event edition! These NPC’s will set you on the path of many adventures, as three new daily event Snowfest Adventures will be available rewarding you 2019 Snowy Seal and Adventure experience upon completion.

The decorations, the lights, the fields covered in snow as more snowflakes gently fall from the sky. Trove’s Hub is definitely the place to hang out with your friends and to join the event celebrations. Almost everybody seems to be in a great mood these days… except the Horned Rumpfus!

These grumpy creatures are ruining it for us all. It seems like their spirits can be lightened up by playing some games, so dare to throw a snowball at them. Let’s see what happens next… it doesn’t hurt to try.

The Snowfest Hub is in place so you can launch your adventures and cash in your beloved 2019 Snowy Seals earned during your event adventures. You’ll have wonderful items for crafting, and remember Trovian… you gotta craft them all:

Flamotrons have invaded the geode topside and they are ready to rumble with their invincibility shields! Don’t worry though: attack them first with snowballs to remove their shield and you are back in business!

Clear your schedule, Trovians, it’s going to be a great event for you to enjoy during the holidays.

Give us your feedback about the event here!

We are happy to announce that Into the Deep has arrived on consoles!

It’s time to face off against behemoths beneath the surface in Trove – Into the Deep. New world bosses have taken up residence in Geode Topside, and now it’s up to you to take out these lurking Leviathans!

These world bosses are a big deal! There are three of them in total – Lobstroso, Timmerse, and Ifera – and each one of them is more difficult to topple than the last. Should you succeed, you and seven of your closest friends can net rewards such as Crystal-3 gear, Lesser Geode Topside caches, special mounts, and more!

Chase them down in the Eerie Vale biome, if you’re up to the challenge.

Use your victories to further light the way – literally! Each Leviathan drops a different Torch that you can equip to your banner slot for additional Light. Take that, creatures of the night.

Tackling these behemoths can be an all-day affair! Top the charts for the most Daily Leviathan Kills and you’ll get more than just an ego boost…you’ll get an Ego Potion, too! These potions will go straight to your head, blowing it up to comical proportions. Use it or lose it, these potions last until the next weekly reset.

We’ve given Adventures some quality of life changes across the board:

Club adventures received a total overhaul with Into The Deep. Each hero now gives one quest, so you know exactly what to expect when you see them in your club. The heroes are feeling more generous too and the amount of Adventurine provided by their adventures has been increased dramatically. All clubs will also enjoy an increased Daily Experience Cap, so get in there and help your club. Trovian Outposts have cropped up all over Trove for a whole host of new adventures. Talk to the heroes in each biome to pick up their quest. Make sure you talk to them all as each adventure can be completed once per day.

(Want to know the nitty gritty details? Check out our patch notes!)

New to the store is a Level 25 Pack. Purchase this pack to receive an empowered gem box of each element in addition to a Class Boost: Level 25 that sets your currently equipped class to level 25.

NOTE: The Level 25 and the 20% Extra Credit Packs are not going to debut on Console on December 16th. This is a known issue and Trove Team is working on having them released for consoles as soon as possible. We will update our Community when we have all the details.

Clear your schedule, Trovians, because it’s a good time to go spelunking in search of danger with Into the Deep.

Give us your feedback about the patch here!