The Demolitionist class makes an explosive comeback on August 7th in the free-to-play action shooter Defiance 2050! Have an absolute blast dealing damage as a Demolitionist and toss grenades, spawn hatchlings, and make your explosions create even more explosions! Now’s your chance to unlock the Demolitionist by either purchasing the Demolitionist Class Pack* or through in-game earned Hunter Commendations.

*For PS4 EU only, the Demolitionist Pack in the Sony store has been delayed, but the class will still be unlockable in game on August 7th. News for when the Pack is available for PS4 EU will be announced on our social channels.

As the Demolitionist, you can cause ultimate destruction and throw Satchel Charges that detonate at your command. Annihilate enemies with the Hatchling Spawner that generates a swarm of hatchlings or unleash a Flashbang that disorients enemies briefly. Upgrade unique passives, like Drop and Roll, to drop a grenade when you perform a dodge roll. Unload an entire Grenade Barrage that significantly reduces cooldowns for grenades or activate Cluster Projectiles that rain down additional explosions on explosion attacks or abilities.

Paradise is just getting started Ark Hunter, now go have a blast!

Join the Open Beta on PC today and become an Ark Hunter in Defiance 2050! Customize your character and choose from the new Assassin, Guardian, Combat Medic, and Assault base classes in beta. Explore the vast post-apocalyptic world of Defiance 2050 and enhance your weapons to fit your own playstyle in this massively cooperative free-to-play action shooter.

Participate in the Defiance 2050 Open Beta on PC all weekend long, starting on June 22 (Friday) at 10:00am PT and ending June 25 (Monday) at 10:00am PT. For this beta event, PC players can download and play Defiance 2050 through Glyph or Steam. Explore and venture as much as you like, there will be no level, power, or area restrictions during this beta, but keep in mind progress will be removed before Head Start and launch in early July.

Become a Founder and be among the first to fight on July 6th in the Defiance 2050 Head Start! During Open Beta, we encourage players to give feedback on the new class abilities and item systems. The in-game store will be disabled and pre-order packs will not affect accounts during the beta test, but items will be available when Defiance 2050 is live. With a Founder’s Pack, you can get a 3-day Head Start, unlock classes, amazing outfits, unique titles, XP boosts, inventory slots, and an awesome ATV for launch. 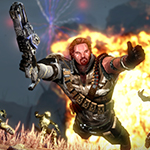 Mayhem ensues with the Midsummer Mutiny event in the original Defiance from June 18 to July 2! In your search for glory, be on the lookout for Dark Matter arkfalls across the New Frontier. It’s time to finish up those remaining Pursuits and be sure to link your Trion Worlds account to earn incredible Valor rewards in Defiance 2050.

Total Valor Cutoff and PC Open Beta – June 22
With the total Valor cutoff date approaching on June 22nd, no new Pursuits have been added for Midsummer Mutiny so players can complete their remaining Pursuits. Get ready to experience the new classes, weapon enhancements, and graphical updates in Defiance 2050’s PC Open Beta from June 22 to 25.

Defiance 2050 Head Start and Launch – July 6 and July 10
Prepare for Defiance 2050’s Head Start on July 6, and launch on July 10. Be among the first to fight in Defiance 2050 on Xbox One, PlayStation 4, and PC (including Steam) by becoming a Founder and playing during Head Start! The free-to-play futuristic action shooter launches July 10, and players will be able to choose from 1 of 4 base classes (Assault, Assassin, Guardian, Combat Medic) to start with. Becoming a Founder can conveniently unlock classes, unique outfits, special titles, and much more, or classes can also be unlocked through gameplay. Enjoy playing Defiance or Defiance 2050 on the platform you prefer this summer, and we’ll see you in the New Frontier!